The precise neurological mechanisms that underlie the brain’s ability to experientially access the unified field are rather sophisticated, and lie somewhat beyond the scope of this summary. Briefly, it is increasingly postulated by researchers studying the neuroscience of consciousness that quantum mechanics plays a pivotal role in the phenomenon of consciousness—i.e., that without quantum-mechanical effects in the brain, the intrinsic liveliness of experience we call “consciousness” would simply not exist.

Here, the latest understandings from string theory may offer important new insight. In a series of remarkable theoretical developments, it has been shown that wherever quantum mechanics is present (e.g., in brain processes associated with consciousness), the unified field is equally present. I.e., wherever quantum mechanics plays a role, string theory equally plays a role.

The key feature of quantum-mechanical behavior is known as quantum entanglement—the mysterious property by which separated particles (or separated quantum systems) remain perpetually connected, even over vast distances. This connection is mysterious because there is no possible physical connection that links them within the causal structure of 3+1 dimensional space-time. But string theory coupled with AdS/CFT gauge-gravity duality (“holographic duality”) explains that while no such physical connection exists in 3+1 dimensions, from a higher-dimensional (4+1 D) perspective, the separated entangled quantum particles are, in fact, two end-points of a single superstring. Thus, from a higher-dimensional perspective, the mystery of long-range “invisible” entanglement is substantially resolved. 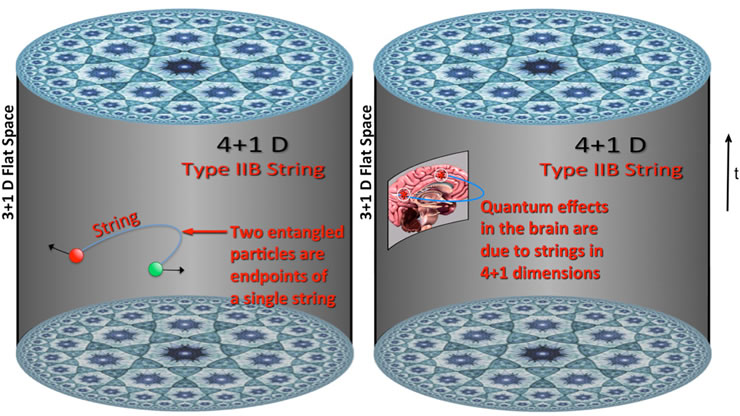 Figure 3. Separated entangled particles in 3+1 dimensions are simply two endpoints of a single string from the higher-dimensional perspective of string theory in 4+1 dimensions (left). Similarly, quantum effects in the brain, including certain neuronal quantum effects hypothetically associated with consciousness, can likewise be seen as string-theoretic phenomena—as phenomena of the unified field (right).

More generally, phenomena that were previously understood as quantum-mechanical processes at the atomic or molecular scale can now be equivalently viewed as string-theoretic phenomena—as phenomena of the unified field.