Extensive research, including 50 scientific replications and 23 studies published in peer-reviewed journals, demonstrates that TM practice, and in particular group TM practice, is an effective, and highly cost-effective, approach for reducing societal stress and associated crime and social conflict.

It is not surprising that reducing stress on the individual level leads to a corresponding reduction of stress on the societal level. Yet it is both surprising and fortunate that even a relatively small proportion of a population practicing this powerful, stress-reducing technology in a group produces a disproportionate and demonstrable reduction in societal stress and its associated crime and social violence. The meditating group generates an extensively documented “spillover” effect of orderliness and calm in the surrounding society.

Theoretical explanations of this surprisingly powerful positive impact of group meditation on crime and social stress include a “field model of consciousness,” in which consciousness, at its deepest level, is a field that underlies and connects individuals throughout society [16]. Such a theory is consistent with the latest findings in physics, physiology, and neuroscience (see figure, below). In any such field model (irrespective of its details), the stress-reducing, peace-promoting influence generated by a group will grow as the square of the size of the group. This N2 power of a peace-creating group has been repeatedly confirmed by dozens of published scientific studies—and renders this Brain-Based Approach to Peace especially practical. It means that only a few thousand individuals are needed to produce an extremely powerful and scientifically demonstrable effect of orderliness and calm in the surrounding society—even on a national or global scale. (See Scientific Research.) 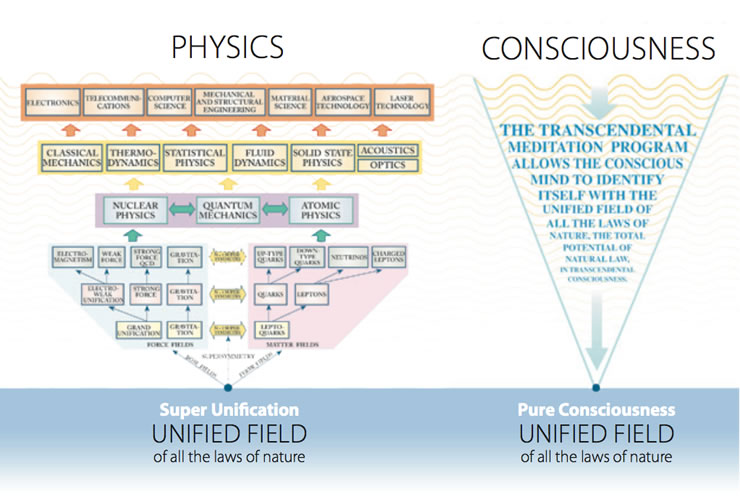 Modern physics has located more unified levels of nature’s functioning at smaller time and distance scales, culminating in the discovery of the unified field (superstring field) at the foundation of the universe. The TM and advanced TM-Sidhi® program provide direct experience of quieter, deeper levels of thought—culminating in the experience of the unified field at the basis of mind and matter. Group practice powerfully stimulates this universal, unified field of collective consciousness, creating a demonstrable, coherent influence throughout society. (For more details, see Theoretical Foundation.)