The unique effectiveness of the Brain-Based Approach to Peace in preventing social violence, terrorism, and war has been confirmed by more than 50 demonstrations and 23 scientific studies. This research has been carefully scrutinized by independent scholars and accepted for publication in leading, peer-reviewed academic journals. In every case, this approach produced marked reductions of crime, social violence, terrorism, and war, and increased peace and positivity in society. 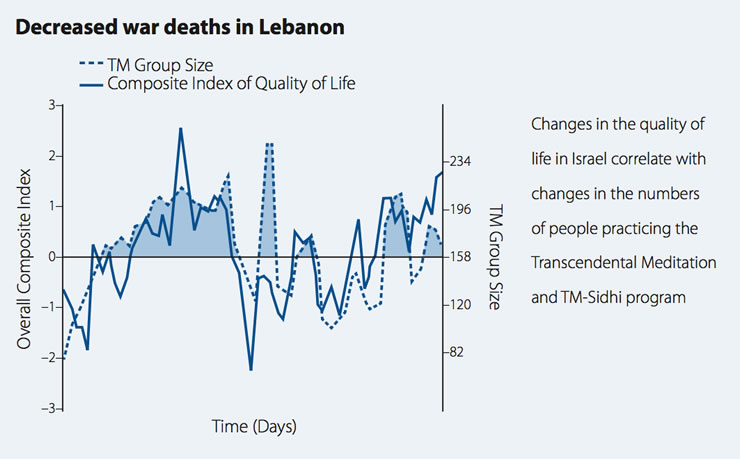 A critical experimental test of the societal impact of the Brain-Based Approach to Peace was conducted during the peak of the Lebanon war. A day-by-day study of a two-month assembly in Israel in 1983 showed that, on days when the number of participants (“TM Group Size,” right) was high, war deaths in neighboring Lebanon dropped by 76%
(p = .0006). In addition, crime, traffic accidents, fires, and other indicators of social stress in Israel (combined into a Composite Index) all correlated strongly with changes in TM group size. Other possible causes (weekends, holidays, weather, etc.) were statistically controlled for (Journal of Conflict Resolution 32: 776-812, 1988) [2]. 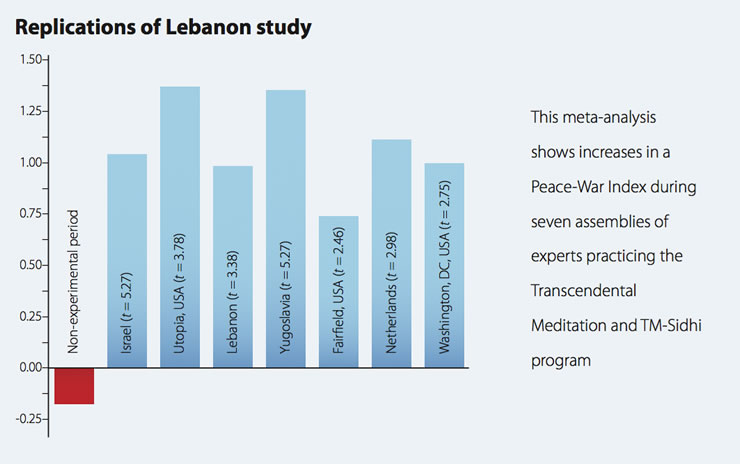 These results were subsequently replicated in seven consecutive experiments over a two-year period during the peak of the Lebanon war. The results of these interventions included:

The likelihood that these combined results were due to chance is less than one part in 1019, making this effect of reducing societal stress and conflict the most rigorously established phenomenon in the history of the social sciences (Journal of Social Behavior and Personality 17(1): 285–338, 2005) [3].

In addition, the global influence on terrorism of three large coherence-creating assemblies was studied retrospectively through an analysis of data compiled by the Rand Corporation. The data revealed a 72% reduction in worldwide terrorism during the three assemblies taken together, as compared to all other weeks during a two-year period. Each assembly had approached or exceeded the participation threshold (8,000) predicted to create a global influence of peace. The study ruled out the possibility that this reduction in terrorism was due to cycles, trends, or drifts in the measures used, or to seasonal changes (Journal of Offender Rehabilitation 36 (1-4): 283-302, 2003 and references) [17]. 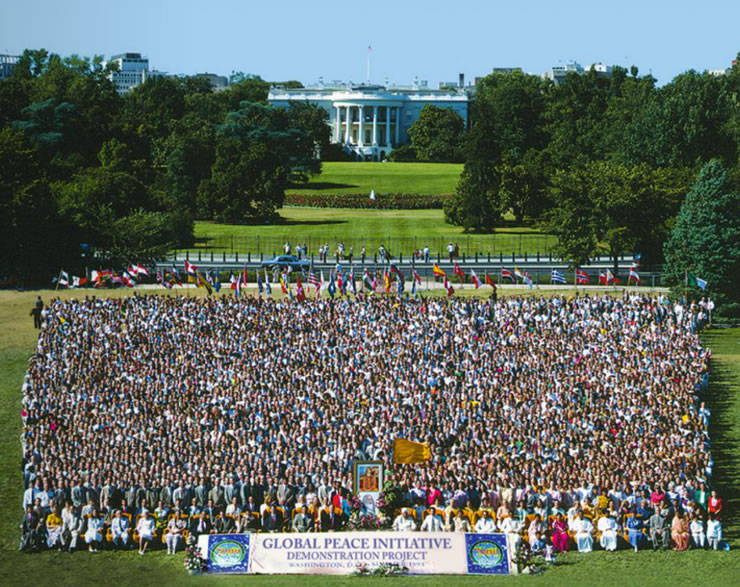 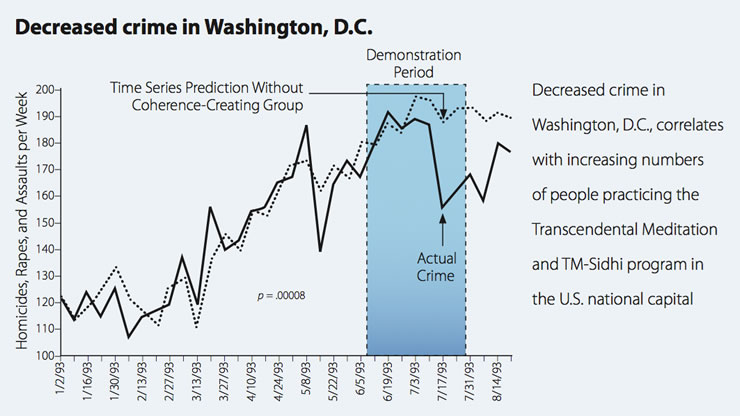 A National Demonstration Project conducted in Washington, D.C., from June 7 to July 30, 1993, tested the efficacy of the Brain-Based Approach to Peace for reducing crime and social stress and improving the effectiveness of government.

In this carefully controlled experiment, the coherence-creating group increased from 800 to 4,000 over the two-month period. Although violent crime had been steadily increasing during the first five months of the year, soon after the start of the study, violent crime (measured by FBI Uniform Crime Statistics) began decreasing and continued to drop until the end of the experiment (maximum decrease 23.3%), after which it began to rise again. The likelihood that this result could be attributed to chance variation in crime levels was less than two parts per billion (p < .000000002). The drop in crime could not be attributed to other possible causes, including temperature, precipitation, weekends, and police and community anticrime activities (Social Indicators Research 47: 153-201, 1999) [1].

These are just a few of the more than 50 scientific demonstrations and 23 published studies on this Brain-Based Approach and its impact on society. These studies are backed by more than 350 other published, peer-reviewed studies conducted at over 200 independent universities and research institutes in 30 countries on the individual and societal benefits of these powerful technologies of consciousness. This extensive body of scientific research makes the Brain-Based Approach to Peace one of the most thoroughly tested and rigorously established technologies of preventive defense in the world today.

Broad-Based Improvements in Quality of Life 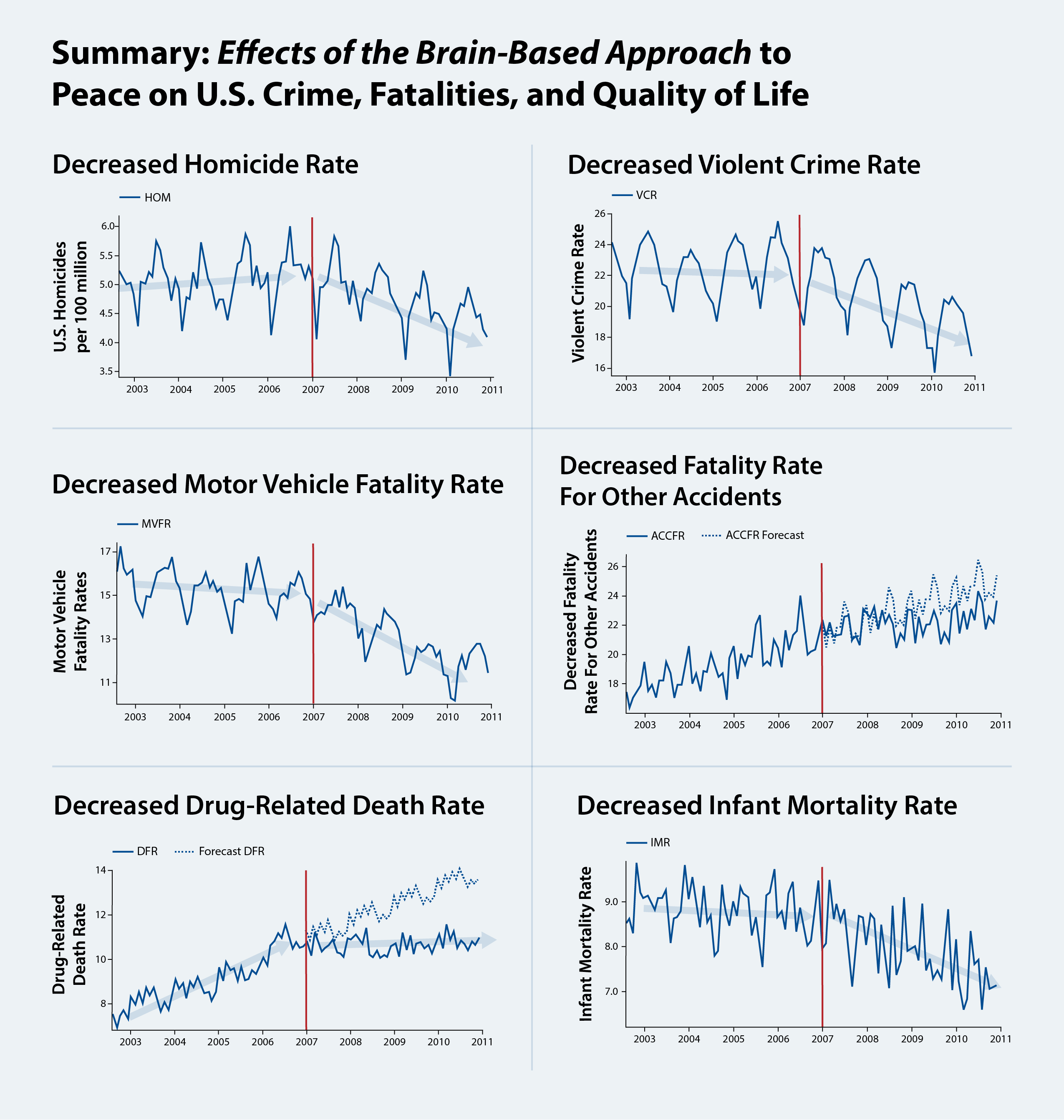 A series of four peer-reviewed studies published in 2016–2017 demonstrated that when a large U.S.based group of experts practicing the Brain-Based Approach to Peace reached the required threshold size in 2007–2010, measurable positive change took place throughout the entire nation across a wide range of social indicators. These outcomes included statistically significant decreases in rates of homicide, violent crime, motor vehicle fatalities, accidental deaths, drug-related deaths, and infant mortality. These broad-based outcomes support the theoretical proposal that group practice of this approach to peace creates a spillover field effect throughout society that positively impacts overall quality of life (SAGE Open 6 (2): 1–16, 2016; Journal of Health and Environmental Research 3 (3-1): 32–43, 2017; Journal of Consciousness Studies 24 (1–2): 53–86, 2017; SAGE Open 7 (1): 1–15, 2017). 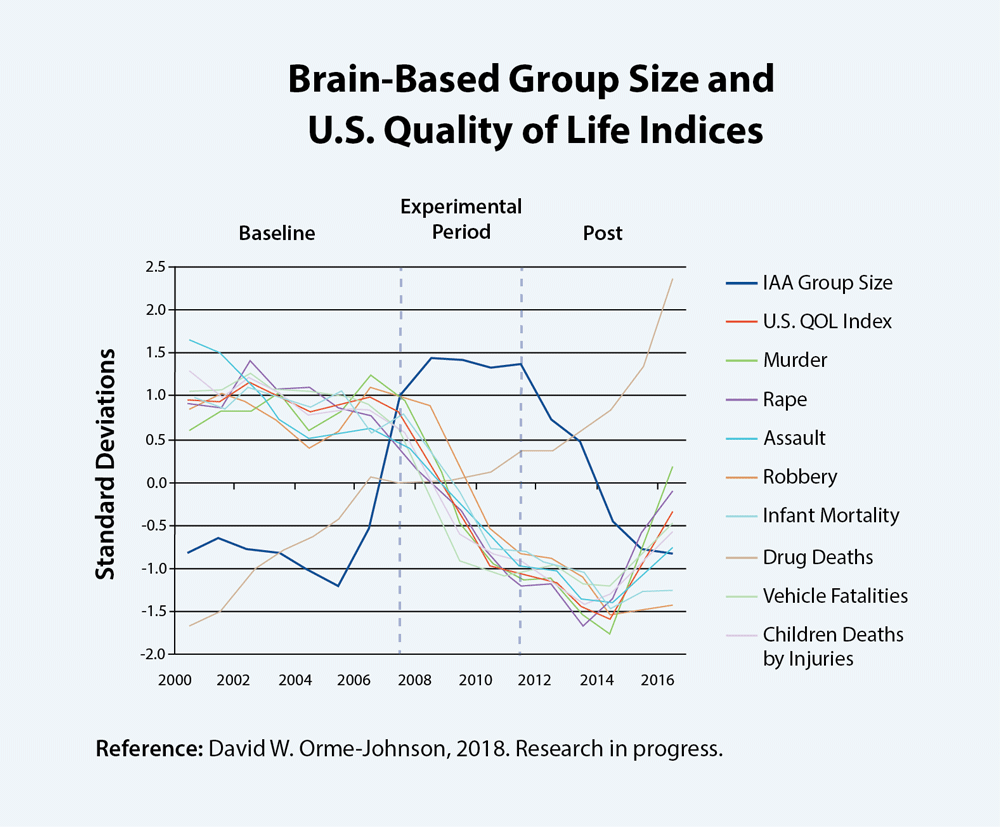 When charted together, these outcomes reveal a holistic improvement in diverse measures of quality of life during the experimental period. This overall improvement cannot plausibly be accounted for by alternative possible explanations for the observed changes in the individual social indicators. These outcomes, as well as the significant predicted reversal of these effects after the experimental period ends, lend support to the theory of a field effect of consciousness underlying social change. 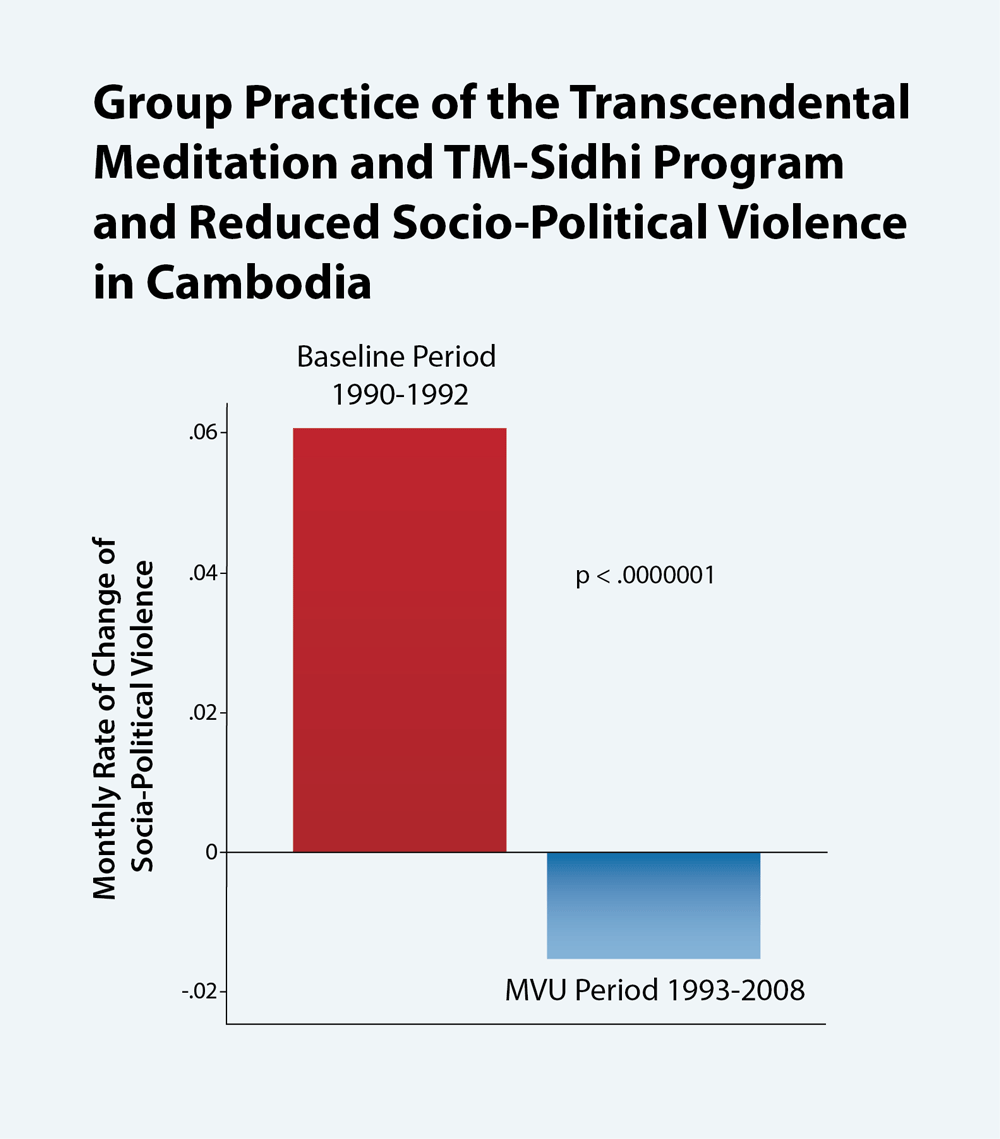 In addition, a peer-reviewed study published in May 2019 showed that group practice of the Brain-Based Approach to Peace in Cambodia between 1993 and 2008 was associated with a 96.2% decline in sociopolitical violence in that war-torn country, as compared with violence in the preceding three years. The authors concluded the likelihood that this reversal in the rising 1990-1992 trend of violence occurred randomly was one in 10 million (Studies in Asian Social Sciences 6 (2):1-45,2019).