The Brain-Based Approach to Peace:

Science has discovered that nature has a hierarchical structure. During the course of the 20th century, physics sequentially uncovered deeper levels of physical reality—from the macroscopic to the microscopic, molecular, atomic, nuclear, and sub-nuclear levels of nature’s functioning.

This inward exploration of deeper, progressively more unified levels of nature culminated in the recent discovery of completely unified field theories based on the superstring. These theories locate a single, universal, unified field of intelligence at the basis of all forms and phenomena in the Universe.

In a precisely parallel way, the human mind has been found to have a hierarchical structure. There is what is commonly referred to as the “surface level” of mind—the active thinking mind in which the awareness is directed outward through the macroscopic senses. But there are also deeper, quieter levels of mind, in which the awareness is more inwardly directed—the levels of “abstract thinking” and “fine feeling.”

Mathematicians have more finely subdivided and codified these deeper, more expanded levels of awareness—with each deeper level governed by its own unique mathematical logic. These deeper levels are progressively more complete, more expanded, logically more powerful, and increasingly abstract. This expanding hierarchy of human comprehension culminates in what is called the Universe of Sets—a completely transcendental level that includes, but lies beyond, all mathematically definable concepts of infinity.1 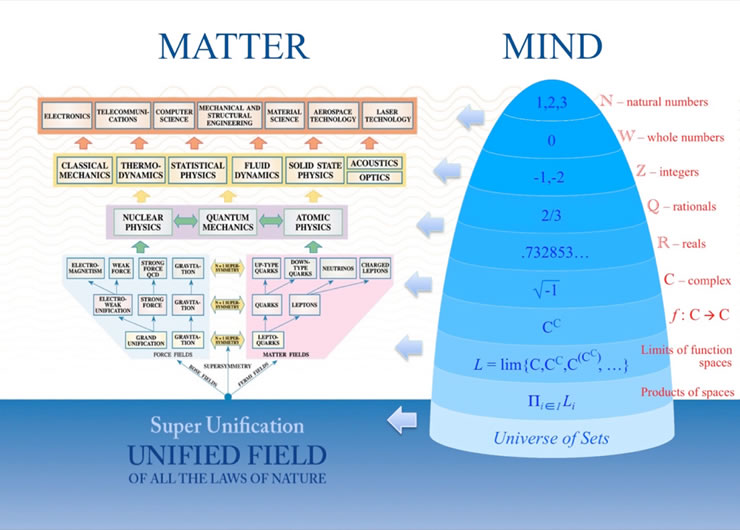 Figure 2: The hierarchical structure of mathematical logic. The natural numbers (or “counting numbers”) are the most familiar, concrete, and intuitively accessible numerical system, well suited to day-to-day human interactions. The addition of the number “0” (the additive identity) by early Indian mathematicians elevates the natural numbers to the whole numbers—a slightly more complete and logically more powerful framework, if somewhat more abstract. The addition of negative numbers to form the integers results in a system that is closed under subtraction—i.e., in which the operation of subtraction can, for the first time, be properly defined. The addition of fractions results in the rational numbers, in which the operation of division can be properly defined. The resulting, more complete and powerful mathematical framework is suitable for accounting and most other practical purposes and endeavors. All the above four numerical systems constitute infinite sets of the same size. Between any two fractions there are an infinite number of “irrational” numbers that cannot be expressed as fractions. The addition of these irrational numbers fills out the gaps in the number line, and constitutes what are called the real numbers, or the continuum. The real numbers constitute a higher order of infinity than the rational numbers, and are key to the formulation of calculus and for comprehending and pursuing the physical sciences, such as classical mechanics. Still more abstract than the inexpressible irrational numbers are the imaginary numbers, which, when added to the reals, give rise to the complex numbers. The complex numbers are essential for formulating quantum mechanics and for understanding the world at the molecular and atomic levels. After the complex numbers come what are called function spaces, limits of function spaces, and products of function spaces, all representing progressively higher orders of infinity. These are necessary for the proper formulation and understanding of physics at the quantum-field-theoretic and deeper levels. Beyond the largest possible infinity that can be conceived by the human intellect lies the Universe of Sets, an infinity which transcends all mathematically definable infinities, and includes them all.

What Albert Einstein, Eugene Wigner, and many others have found most extraordinary is the remarkably precise parallel between this hierarchical structure of the human mind and the structure of physical nature. To quote Wigner (a.k.a. The Father of the Atomic Age): “The human mind fits nature—like a glove.” This mysterious connection between mind and matter helps to explain why the human mind has the natural capacity to comprehend physical nature. (As Einstein once said, “The most mysterious thing about the Universe is its comprehensibility by the mind.”)

Throughout human history—long before the birth of modern mathematics—there have been contemplative traditions and meditative methods for exploring deeper levels of mind, and by doing so, gaining a deeper comprehension of the Universe. The most ancient and highly developed of these meditative traditions—and the source of most other major traditions—is the Yogic science of meditation rooted in the ancient Vedic knowledge of India.

The Yogic tradition developed systematic methodologies for drawing the awareness deeply within to experience quieter, more expanded levels of thought. This inward flow of the mind naturally culminates in the experience of the source of thought—pure consciousness—traditionally known as samadhi. This maximally expanded state of awareness is the direct experience/realization of what mathematics calls the Universe of Sets—i.e., consciousness beyond comprehension. In the language of physics, it corresponds to the direct conscious experience of the unified field—the fundamental unity at the basis of creation.

Modern physiological science has identified this state of samadhi as a fourth major state of human consciousness, physiologically and subjectively distinct from waking, dreaming, and deep sleep. Neurophysiologically, this experience is marked by the onset of global EEG coherence and increased alpha power, indicating peak orderliness of brain functioning and utilization of the total brain.

This fourth state of consciousness is universally accessible today through specific, highly developed technologies of consciousness derived from the Vedic tradition. Among these technologies, the Transcendental Meditation program and more advanced TM-Sidhi program of Maharishi Mahesh Yogi are the most extensively researched and widely practiced technologies in the world for accessing this fourth state—which in turn leads to the many physiological, psychological, behavioral, and sociological benefits described elsewhere on this website.

The key scientific point here is that when human awareness is maximally expanded—when human awareness opens to, and identifies itself with, the unbounded, universal unified field—then the nature and reach of this state of consciousness is non-localized, and transpersonal. At that fundamental, spatially unbounded, unified level of reality, we are all, in essence, unified: we are all intimately and intricately connected as one universal field of consciousness—the unified field.

In this (or any) field model of consciousness, it follows that the radiated power—and resulting societal effects—emanating from a group of meditators will grow as the square of the number of meditators in the group (i.e., grow quadratically, as opposed to linearly). This is because the amplitude (height) of a wave is equal to the sum of all the contributing waves that occupy a common space. Yet the power of that resulting, combined wave is proportional to the square of the height of that wave. This is why, for example, the volume of two loudspeakers playing monaural sound in close proximity to each other is two-squared—or four times—the sound of a single loudspeaker. It is also why the intensity of laser light grows as the square of the number of photons in the beam. This is a universal principle of wave behavior, known as constructive interference. The resulting N-squared growth of the coherent influence of a meditating group is well documented in the published literature. This N-squared effect makes it highly practical to generate a substantial peace-creating effect with even a relatively small number of meditating participants when they are gathered in a group.

BACK TO TOP | NEXT PAGE