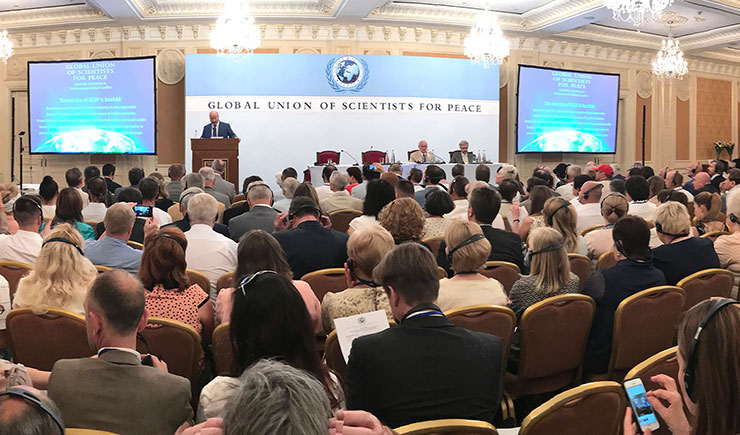 The Global Union of Scientists for Peace is an emerging force in the prevention of terrorism, war, and social violence through the application of cutting-edge, field-tested solutions in the areas of conflict resolution, national security, and global peace.

he Global Union of Scientists for Peace (GUSP) arose from the ashes of the failed Nuclear Non-Proliferation Treaty (NPT) Review Conference in 2005. This diplomatic breakdown underscored the political world’s dangerous addiction to weapons of enormous destructive power—weapons that threaten the existence of the human race and other planetary species.

Alarmed and frustrated by the NPT stalemate, many conference participants, including foremost scientists and leaders most cognizant of the true consequences of nuclear weapons, converged to launch the Global Union of Scientists for Peace—a global counterinitiative to stop the spread of nuclear weapons and to support alternative, peaceful means of conflict resolution. (See GUSP Directors.)

Today GUSP has become a driving force in international efforts to prevent terrorism and war and to promote global peace.

The mission of GUSP is fourfold:

For over sixty years, the scientific community has issued vivid warnings about the catastrophic effects of thermonuclear war and has called for the abolition of these world-destroying weapons. Albert Einstein and Bertrand Russell mobilized the first coalition of preeminent scientists and scholars to address this existential threat:

On the danger of nuclear annihilation

“In view of the fact that in any future world war nuclear weapons will certainly be employed, and that such weapons threaten the continued existence of mankind, we urge the Governments of the world to realize, and to acknowledge publicly, that their purpose cannot be furthered by a world war, and we urge them, consequently, to find peaceful means for the settlement of all matters of dispute between them.”

“The world continues to head at an ever-accelerating pace towards the ultimate crisis from which there is no return. As long as nuclear weapons remain in the arsenals, with the number of nations possessing them threatening to increase greatly in the absence of a more effective worldwide non-proliferation arrangement, we shall continue to live on the brink of global disaster.”

The futility of a missile defense

“Missile defenses do not address the major threats today. There is little incentive for a developing country to use long-range missiles. Other means of delivery are less expensive, more reliable, less attributable, and can deliver larger payloads more accurately than long-range missiles. Brandishing the vast nuclear capabilities of the United States will not make us safer, but will only increase these dangers.”

The threat of nuclear terrorism

“In light of the real possibility that terrorists could acquire and use nuclear weapons to kill hundreds of thousands of innocent people, never has the need to eliminate the threat posed by nuclear weapons been more urgent.”

Since Russell-Einstein, many leading scientists and scientific coalitions have persistently warned of the grave dangers to humankind posed by nuclear weapons. Yet despite these persistent warnings, nuclear nations continue to expand and/or modernize their deadly arsenals. Some have developed destabilizing battlefield weapons, like the nuclear “bunker buster,” which blur the line between conventional and nuclear war and thereby increase the likelihood of nuclear first use. And today, many non-nuclear-weapons states, in defensive response, are intent on developing their own nuclear capability.

The historic motivation for treading the nuclear path has been that there is no secure shield against nuclear attack—and consequently, the only feasible defense has been to possess one’s own nuclear arsenal and thereby pose a credible threat of devastating nuclear retaliation.

This strategy of defense based upon lethal retaliation—a.k.a. “mutually assured destruction” (MAD)—has created a dangerous global standoff. History records numerous instances where spiraling tensions nearly unleashed a devastating nuclear war. And recent events underscore the threat to civilization posed by a single, unstable ruler with access to the nuclear trigger.

The need for a new approach

With the shifting geopolitical landscape and the rise of terrorist nation-states, the strategy of nuclear deterrence is increasingly ineffective and outmoded. The threat of nuclear retaliation will not deter terrorist groups or suicide bombers, who are willing to sacrifice their own lives to wreak destruction upon their political and religious enemies—or terrorist organizations who possess no sovereign territory that could serve as a target for a retaliatory strike.

Today, every nation is vulnerable. Even the mightiest nations have fallen prey to escalating terrorist attacks. Conventional military approaches appear unsuited and unable to prevent such attacks. Diplomatic efforts face similar challenges. In a world torn by deep-seated hostilities and regional tensions, compromise and diplomatic solutions have been elusive. Hard-won negotiated settlements and ceasefires typically afford only fleeting relief. Paper treaties among rival factions have proven too fragile a basis for lasting peace.

Clearly, a fundamentally new approach is needed. The scientific research is increasingly clear: Traditional approaches to conflict resolution and conflict prevention fail, in large measure, because they do not address the underlying cause of violence and social conflict: they do not relieve the acute political, ethnic, and religious tensions that fuel terrorism and conflict. For diplomacy and other conventional approaches to succeed, we first need an effective means to defuse these deep-seated tensions—an approach that can prevent these societal tensions from reaching the boiling point.

It is gratifying to report that such innovative, effective approaches to defense and conflict prevention exist—and in key respects, already have a better track record of success than conventional approaches to security and peace. These innovative, evidence-based approaches are the primary focus of GUSP today, and are described in detail in the section Defusing World Crises.