Note: This recent article in The New York Times underscores the seriousness of the threat posed by Climate Change, and the resulting mass dislocations of populations that could result.
— John Hagelin, President

Seas Are Rising at Fastest Rate in Last 28 Centuries 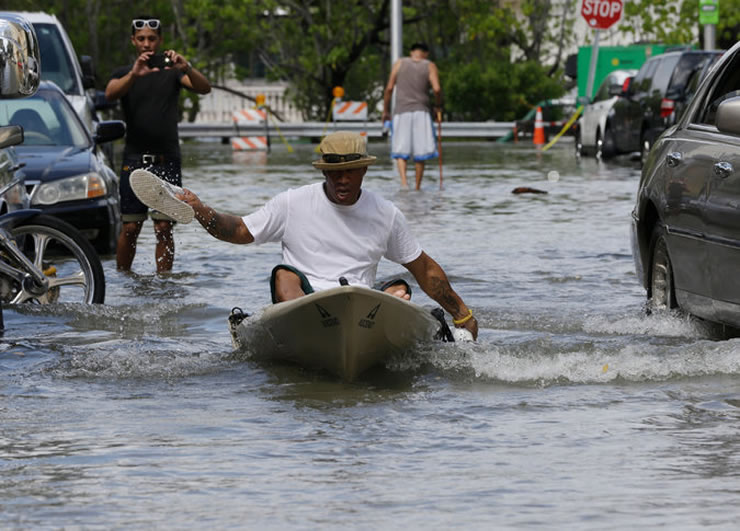 Juan Carlos Sanchez paddled a kayak with his shoes on a flooded street in Miami Beach last year.

The worsening of tidal flooding in American coastal communities is largely a consequence of greenhouse gases from human activity, and the problem will grow far worse in coming decades, scientists reported Monday.

Those emissions, primarily from the burning of fossil fuels, are causing the ocean to rise at the fastest rate since at least the founding of ancient Rome, the scientists said. They added that in the absence of human emissions, the ocean surface would be rising less rapidly and might even be falling.

The increasingly routine tidal flooding is making life miserable in places like Miami Beach; Charleston, S.C.; and Norfolk, Va., even on sunny days.

Though these types of floods often produce only a foot or two of standing saltwater, they are straining life in many towns by killing lawns and trees, blocking neighborhood streets and clogging storm drains, polluting supplies of freshwater and sometimes stranding entire island communities for hours by overtopping the roads that tie them to the mainland.

Such events are just an early harbinger of the coming damage, the new research suggests.

“I think we need a new way to think about most coastal flooding,” said Benjamin H. Strauss, the primary author of one of two related studies released on Monday. “It’s not the tide. It’s not the wind. It’s us. That’s true for most of the coastal floods we now experience.”

In the second study, scientists reconstructed the level of the sea over time and confirmed that it is most likely rising faster than at any point in 28 centuries, with the rate of increase growing sharply over the past century — largely, they found, because of the warming that scientists have said is almost certainly caused by human emissions.

They also confirmed previous forecasts that if emissions were to continue at a high rate over the next few decades, the ocean could rise as much as three or four feet by 2100.

Experts say the situation would then grow far worse in the 22nd century and beyond, likely requiring the abandonment of many coastal cities.

The findings are yet another indication that the stable climate in which human civilization has flourished for thousands of years, with a largely predictable ocean permitting the growth of great coastal cities, is coming to an end.

“I think we can definitely be confident that sea-level rise is going to continue to accelerate if there’s further warming, which inevitably there will be,” said Stefan Rahmstorf, a professor of ocean physics at the Potsdam Institute for Climate Impact Research, in Germany, and co-author of one of the papers, published online Monday by an American journal, Proceedings of the National Academy of Sciences.

In a report issued to accompany that scientific paper, a climate research and communications organization in Princeton, N.J., Climate Central, used the new findings to calculate that roughly three-quarters of the tidal flood days now occurring in towns along the East Coast would not be happening in the absence of the rise in the sea level caused by human emissions.

The lead author of that report, Dr. Strauss, said the same was likely true on a global scale, in any coastal community that has had an increase of saltwater flooding in recent decades.

The rise in the sea level contributes only in a limited degree to the huge, disastrous storm surges accompanying hurricanes like Katrina and Sandy. Proportionally, it has a bigger effect on the nuisance floods that can accompany what are known as king tides.

The new research was led by Robert E. Kopp, an earth scientist at Rutgers University who has won respect from his colleagues by bringing elaborate statistical techniques to bear on longstanding problems, like understanding the history of the global sea level.

Based on extensive geological evidence, scientists already knew that the sea level rose drastically at the end of the last ice age, by almost 400 feet, causing shorelines to retreat up to a hundred miles in places. They also knew that the sea level had basically stabilized, like the rest of the climate, over the past several thousand years, the period when human civilization arose.

But there were small variations of climate and sea level over that period, and the new paper is the most exhaustive attempt yet to clarify them.

The paper shows the ocean to be extremely sensitive to small fluctuations in the Earth’s temperature. The researchers found that when the average global temperature fell by a third of a degree Fahrenheit in the Middle Ages, for instance, the surface of the ocean dropped by about three inches in 400 years. When the climate warmed slightly, that trend reversed.

In the 19th century, as the Industrial Revolution took hold, the ocean began to rise briskly, climbing about eight inches since 1880. That sounds small, but it has caused extensive erosion worldwide, costing billions.

Due largely to human emissions, global temperatures have jumped about 1.8 degrees Fahrenheit since the 19th century. The sea is rising at what appears to be an accelerating pace, lately reaching a rate of about a foot per century.

One of the authors of the new paper, Dr. Rahmstorf, had previously published estimates suggesting the sea could rise as much as five or six feet by 2100. But with the improved calculations from the new paper, his latest upper estimate is three to four feet.

That means Dr. Rahmstorf’s forecast is now more consistent with calculations issued in 2013 by the Intergovernmental Panel on Climate Change, a United Nations body that periodically reviews and summarizes climate research. That body found that continued high emissions might produce a rise in the sea of 1.7 to 3.2 feet over the 21st century.

In an interview, Dr. Rahmstorf said the rise would eventually reach five feet and far more — the only question was how long it would take. Scientists say the recent climate agreement negotiated in Paris is not remotely ambitious enough to forestall a significant melting of Greenland and Antarctica, though if fully implemented, it may slow the pace somewhat.