Note: Although the international Nuclear Strategic Summits (2010-2016) have made progress toward securing nuclear materials and reducing global nuclear arms, the grave and disproportionate threat posed by terrorist organizations gaining access to nuclear materials underscores the fact that these approaches are insufficient to ensure national security and peace.   — John Hagelin, President

Fallout From The Nuclear Security Summit 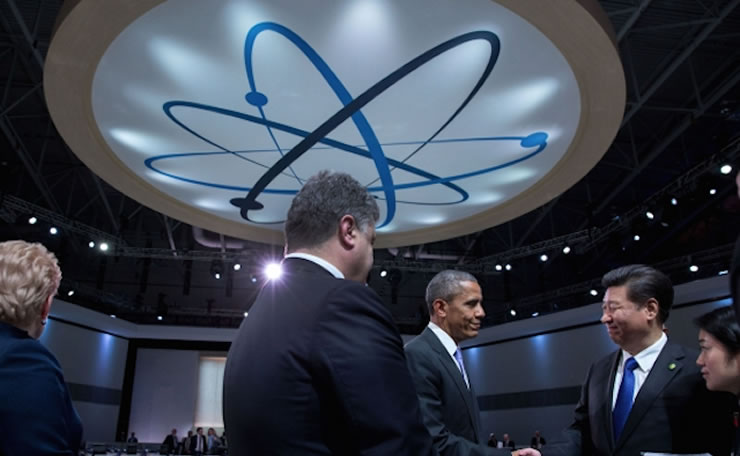 The Nuclear Security Summit that just ended Friday in Washington, D.C. wrangled over several thorny nuclear proliferation and terrorism issues, and involved over 50 countries. But the two countries on everyone’s mind were China and Russia. China, because they have started on the world’s largest nuclear build-up in 50 years. And Russia, because they decided not to attend at all.

The fourth Nuclear Security Summit, in the series begun by the Obama administration, showcased definite successes, particularly the significant global reduction in nuclear weapons, the global reduction in nuclear material stockpiles, the increased security on nuclear facilities, the dozen countries that are now free of weapons-grade materials, a newly-amended nuclear protection treaty, and the historic nuclear deal with Iran that has, so far, gone as planned.

Front and center were potential nuclear terrorist threats, not surprising given last week’s Brussels attack and the terrorist’s surveillance of nuclear scientists and facilities. However, terrorist threats are still much less likely than state threats, such as North Korea and Pakistan, or the possibility of a new nuclear arms race in the Middle East.

The absence of Russia was troubling from several perspectives. They have the most nuclear weapons and nuclear materials in the world and they are a key player in the success of the Iran nuclear deal. But Russia’s economy continues to deteriorate, leading to crumbling nuclear infrastructure and a lack of funding for nuclear scientists and inspectors. Corruption and organized crime are endemic which leads to fears of nuclear materials smuggling.

But with respect to China, there was both good and bad.

On the plus side, there is no doubt that China is committed to help thwart nuclear terrorism and rogue states, and is serious about nuclear safety and security. China and the U.S. issued a joint statement on nuclear security cooperation, committing each country to working together to “foster a peaceful and stable international environment by reducing the threat of nuclear terrorism and striving for a more inclusive, coordinated, sustainable and robust global nuclear security architecture for the common benefit and security of all.”

The United States and China proudly heralded the successful completion and official opening of the international Nuclear Security Center of Excellence in Beijing two weeks before the summit. This Center will greatly assist implementing global nuclear security.

President Obama and President Xi Jinping were also upbeat in announcing another significant step in their joint climate efforts, signaling that both countries will sign the Paris Agreement on April 22nd and take the domestic steps needed to join the Agreement as early as possible this year.

However, the failure to restrain North Korea, and China’s military build-up in the South China Sea, caused some anxiety at the summit. Even though President Xi has declared that China would not pursue militarization of these strategic waterways, it appears that they are doing just that. The neighboring countries of the Philippines, Malaysia and Vietnam are getting nervous.

China has a strong interest in nuclear security. China plans to spend over a trillion dollars to become the world’s largest producer of nuclear power. They will build 40 new reactors by 2020, another hundred by 2030, and over 200 additional reactors by 2050. Their new Five-Year Plan puts China on track to meet this ambitious schedule.

The rush to expand nuclear power comes from China’s tremendous air pollution from existing coal-fired power plants. Coupled with the need to double their energy production in order to move the rest of their population into the middle class, it is no wonder nuclear, and many other forms of generation, is being ramped up so much and so fast.

Not only does China want to replace its old coal fleet with new nuclear, it wants to become the leading exporter of nuclear technology as well, including heavy components in the supply chain where the real global bottleneck on nuclear expansion is. Their recent nuclear deals in the U.K. and Europe are indications that this path is bearing fruit.

At the same time, China is building up their nuclear weapons capabilities. China’s defense spending is twice that of Russia, and second only to the United States, although it is a match for the U.S. as a percentage of its GDP.

Keep in mind that weapons expansion goes hand in hand with economic expansion. Every nation or kingdom in history has done so, first as a matter of survival, and then as a matter of expansion. Whether it was steel weapons in the Iron Age, the emerging cannon in the 14th century, or nuclear weapons in the 20th, all major powers think they must have the most destructive, most modern way to destroy its competitors or perceived enemies.

The U.S. intelligence community predicts that in 20 years, China will be the largest nuclear nation in the world, producing over a trillion kWhs a year from nuclear power, will have almost a billion middle class, and will have sufficient nuclear weapons to deter even the United States.

Dr. James Conca is a geochemist, an RDD expert, a planetary geologist and professional speaker. Follow him on Twitter @jimconca and see his book at Amazon.com