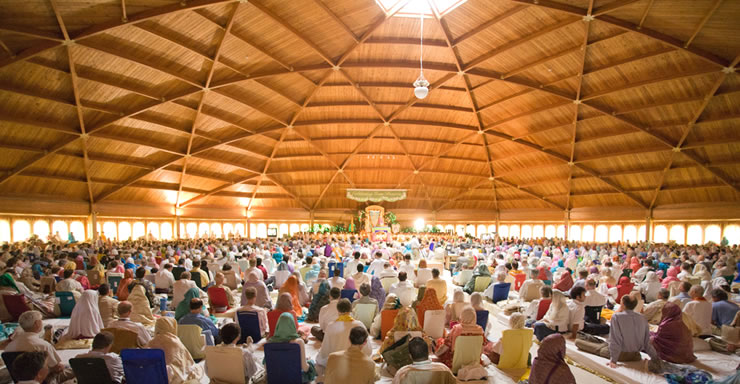 Large groups practicing the advanced Transcendental Meditation program were associated with significant reductions in U.S. homicide and urban violent crime rates during an intervention period of 2007-2010.

Can large group meditation lower the crime rate? The most recent in a series of studies spanning decades suggests again that a sufficiently large group practicing an advanced program of Transcendental Meditation, the TM-Sidhi program, is associated with decreased social violence.

For the period 2007-2010, when there was a sufficiently large group, statistical analysis found a significant decrease in both the national homicide rate and urban violent crime rate compared to trends during the baseline period of 2002-2006. 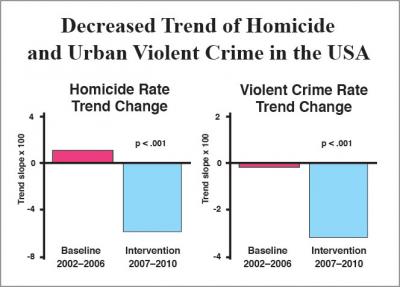 During 2007-2010 when the size of a group of advanced TM-Sidhi program participants exceeded the threshold predicted to reduce negative trends (√1%), there was a significant shift in the US national homicide rate and urban violent crime. Relative to the baseline period of 2002-2006, the drop in homicide rate was 21.2% (5.3% per year) and 18.5% (4.6% per year) for violent crime.

The total drop in the homicide rate relative to the baseline average rate was 21.2% over the four-year intervention period (5.3% per year). Analysis of monthly data showed that a rising trend of U.S. homicides during the baseline period 2002-2006 was reversed during the intervention period 2007-2010 of the study (see graph). Researchers estimate that 8,157 homicides were averted by the highly significant shift from an increasing to a decreasing trend in homicide rates.

Starting in July 2006, advanced meditators assembled at Maharishi University of Management in Fairfield, Iowa, to create a group large enough to have this influence on the U.S. as a whole.

The study was published today in SAGE Open Apr 2016, 6 (2). This journal is a member of the Committee on Publication Ethics (COPE).

A new hypothesis in the social sciences

“I understand it’s a new hypothesis in the social sciences that meditation could have a stress-reducing and coherence-creating effect in society,” said lead author Michael Dillbeck. “But such research is increasingly suggesting that there’s a field effect of consciousness. If you get a large enough group together practicing this technique to experience the field quality of consciousness, these extended ‘field-like’ effects are expressed in society.”

The hypothesis of a field effect of consciousness implies that there is an underlying connection between individuals in much the same way that physics has uncovered greater unity beneath the diversity of matter and energy fields. The more powerfully that underlying field is enlivened, the greater the unifying influence of peace and harmony on the surface levels of life.

The hypothesis was first proposed in 1960 by Maharishi Mahesh Yogi, who introduced the Transcendental Meditation technique. This hypothesis was first confirmed by published research in the 1970s and 1980s when it was observed that those cities that had 1% of the population practicing Transcendental Meditation showed significant increases in positive trends.

The effect was found to be even greater when the advanced TM-Sidhi program was introduced, with observations suggesting that just the square root of 1% of a population could increase harmony and improve diverse measures of the quality of life in society.

While the earlier studies were based on groups doing their advanced meditation programs for periods of several weeks or months, this current study was for a number of years, giving researchers an opportunity to study potential long-term changes.

The study’s authors used a battery of diagnostic tests to establish the validity of the key statistical assumptions of the analysis, which utilized “broken-trend intervention analysis” of outcomes, a form of “interrupted time series analysis.”

For example, violent crime rates fell significantly during the severe recession of 2007-2009 rather than rising as widely expected. According to a leading expert on crime and the economy, this was the first time since World War II in which crime rates failed to rise during a major economic downturn.

See NBC News: Jobless rate up, but crime down: What gives? (Jan 3, 2012). The New York Times published a similar report the previous year: Steady Decline in Major Crime Baffles Experts (May 23, 2011). The Washington Post first reported this news in May 25, 2010: Violent crime in U.S. on the decline.

“Given that there are now multiple studies showing a highly significant relationship between a large group practicing the Transcendental Meditation and TM-Sidhi programs and decreased violence in society, this obviously has implications for crime prevention,” Dr. Dillbeck said.

The group that gathered in the period 2007-2010 has now somewhat dispersed. Dr. Dillbeck suggests that if governments were to support the establishment of groups in various countries, so that these groups could be maintained over long periods, it could have a remarkable effect in reducing hostilities and fostering coherence among nations, which could be assessed by further research. Indeed, a number of countries are already creating such groups through private organizations, and gaining increasing governmental support.