Note: This brief article by Dr. R.K. Pachauri, former chair of the Intergovernmental Panel on Climate Change and our GUSP Director for South Asia, provides a comprehensive yet concise summary of the current state of the nuclear threat. —Dr. John Hagelin

Eliminating the Threat of Nuclear Weapons 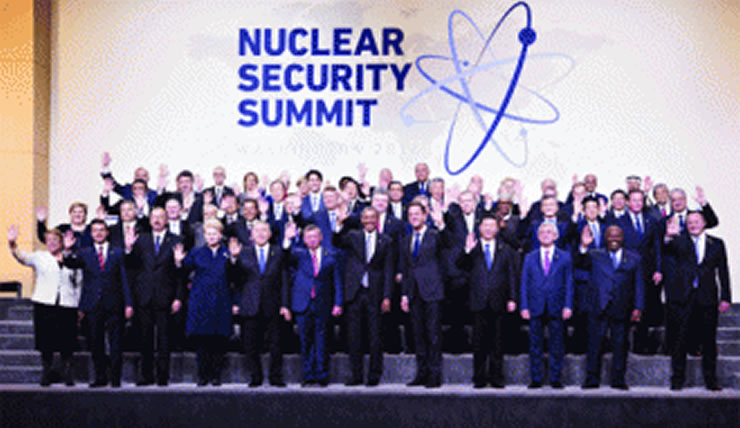 While the nuclear summit of April did not produce any plan of action by which the world could combat the nuclear threat, the ongoing OEWG meet in Geneva must focus on the goal to eliminate wars in totality.

The Nuclear Security Summit held by US President Barack Obama in Washington last month saw a number of world leaders come together to discuss steps that should be taken to reduce the threat of nuclear weapons from conventional war as well as terrorist action. President Obama, while addressing more than 50 world leaders present at the summit, said, “The danger of a terrorist group obtaining and using a nuclear weapon is one of the greatest threats to global security”. He further stated that while no terrorist has yet gained possession of a “dirty bomb” made of radioactive materials, such terrorists pose a persistent and evolving threat. He referred to the fact that the Islamic State has used chemical weapons, including mustard gas, in Syria and Iraq, and, therefore, the use of nuclear weapons was a distinct possibility. Obama further stated that “there is no doubt that if these madmen ever got their hands on a nuclear bomb or nuclear material it is certainly that they will use it to kill innocent”.

The truth is that overall, the world has done very little to reduce the threat of destruction from nuclear weapons despite statements by world leaders focusing on this threat seeking to eliminate it. An article in The Guardian, published in June 2015, mentioned that the latest Nuclear Non-Proliferation Treaty Review Conference did not make waves and there was hardly a word about it in the mainstream media. According to The Guardian, the official nuclear-armed states, that is the US, the UK, Russia, China and France, are estimated to possess about 15,650 nuclear weapons, with the vast majority owned by the US and Russia. This huge arsenal of nuclear weapons is enough to blow up this planet several times over and to destroy life of every kind both on land as well as in the oceans. It is ironic that more than 25 years after the end of the cold war, the reduction in the total stockpile of nuclear weapons across the globe remains low.

While the Washington Summit of April did not produce any tangible agreement or plan of action by which the world could reduce the risk of nuclear danger, what was particularly heartening was the statement delivered on the occasion by the President of Kazakhstan, Nursultan Nazarbayev. Nazarbayev made a strong plea to reduce the threat of war on a global scale and outlined a programme for ensuring that the 21st century is a world without wars. His proposal involved several steps which need to be accepted and implemented with a sense of urgency.

The first of these involves gradual progress towards a world free of nuclear and other weapons of mass destruction. Second, he recommended that we must build on and expand existing geographical initiatives to gradually eliminate war as a way of life. Third, he stated that it is necessary to eliminate such relics of the cold war as military blocs, because these threaten global security and impede broader international cooperation. His fourth recommendation was to adapt the international disarmament process to the new historic conditions. For instance, he felt that we need a new strategy for the UN Conference on Disarmament. His fifth suggestion was that a world without war requires primarily fair global competition in international trade, finance, and development. A world full of inequality and systems biased in favour of the rich and powerful will only create conditions that enhance the risks of nuclear devices being used for mass destruction and economic domination.

In 2001, former media mogul Ted Turner and Senator Sam Nunn established an organisation called the Nuclear Threat Initiative, which has been monitoring global developments on the threat that the world faces from nuclear weapons and materials. NTI has carried out a very useful analysis of the Nuclear Security Summit convened by Obama, and in its progress report it points out that 83 per cent of global stocks of weapons — usable nuclear materials are military materials, and, therefore, outside international mechanisms. While the summit re-affirmed the fundamental responsibility of states to maintain effective security of all nuclear and other radioactive material, it did not take additional steps to address the security of the 83 per cent component of global stocks which are under military control. Incidentally, at the summit, Pakistan’s national statement noted that it has secured nuclear materials and all related facilities in all places, which can be interpreted as including military nuclear materials. However, this whole area remains a major gap in the global system.

Undoubtedly, one of the major achievements of successive Nuclear Summits has been the high level of political attention that these events have created on the subject of nuclear security. However, it is essential to sustain this high-level attention, so that a successful and effective global nuclear security system can be created worldwide, there by eliminating the threat of damage and destruction from nuclear devices.

The United Nations General Assembly voted in December, 2015 to establish a special working group which was provided with a mandate to develop “legal measures, legal provisions and norms” for achieving a nuclear-weapon-free world. This so-called Open-Ended Working Group held its first session in February. As expected, there were sharp divisions between various countries during their discussions. Several delegations, including those of Brazil and Indonesia put forward the view that a total ban treaty is the most logical next step since it can be negotiated now even without the support of the nuclear weapon states which have boycotted this open-ended working group. The next session is taking place now in Geneva, where it is expected that several states will call for a nuclear weapons ban.

The danger from nuclear weapons can be minimised or eliminated only if there is a distinct change in human intentions and actions that eliminates the threat of war completely. It is noteworthy that Nazarbayev took the determined step of removing nuclear devices from his country’s territory and terminate all nuclear tests immediately after the break-up of the Soviet Union. In fact, the UN General Assembly resolution on the universal declaration for the achievement of a nuclear-weapons-free world was put forward by Kazakhstan.

Technology now has raised the extent of the damage that is possible from today’s weapons of mass destruction. War is, therefore, not an option for settlement of disputes, and legal as well as peaceful systems need to be established, which ensure the total elimination of war. At the same time, efforts to ban nuclear weapons and a process by which these can be systematically eliminated, acquire urgency. As the OEWG meets in Geneva, delegations should keep in focus the essential goal of a 21st century in which wars are eliminated totally. That will also support a total ban on nuclear weapons and material across the globe. India should take a proactive approach.

(The writer is former chairman, TERI.)